Here at Peakhour, when we're not making websites faster and secure, we love new tech, and we love a good scheme. We ran Seti@home while at uni, and mined some bitcoin back in its early days (unfortunately we don’t have them anymore). Just recently we decided to set up a Chia Farm, that's not the super-food Chia, but the new crypto coin Chia!

Chia is not just a crypto currency, it is a brand new blockchain and smart transaction platform that implements the first new Nakamoto consensus algorithm since bitcoin. It was invented by the engineer behind BitTorrent, Bram Cohen, who set out to address the shortcomings of Bitcoin.

The Chia network is set to officially launch on May 3rd and the crypto world is going crazy getting ready.

I thought Bitcoin was great, what’s wrong with it?

The major flaws that Chia sets out to address are:

Without getting too technical, Bitcoin relies on very intensive computations to verify transactions (Proof of work), these computations are carried out by 'miners' who are rewarded for their efforts from an ever decreasing pool of possible bitcoin. As the blockchain gets older, the verification gets harder, and as a result the Bitcoin network is now consuming as much electricity as a mid-sized country like Argentina. Huge mining operations have been set up in China and some even have dedicated power plants. A poster child for the environmental impacts of bitcoin are an Australian startup looking to reopen a decommissioned coal power plant to power its mining operations.

The huge energy requirements have led to the setup of massive server farms in cool regions near cheap electricity, concentrating mining in the hands of a few large players. This centralisation opens up Bitcoin to the possibility of manipulation as anyone with 50% of the network can effectively change the blockchain.

How does Chia address these issues with Bitcoin?

Chia has implemented a new consensus algorithm called proof of space and time. It relies on unused hard disk space, which lots of people have, and can use free of charge. Again, without getting too technical, 'Farmers' seed unused space on their hard drive/ssd with 'plots' of cryptographic numbers. When verifying transactions the network issues a challenge to the farmers who then scan their plots for the closest answer, the farmer passes this answer back to a server on the network known as a 'timelord'. The farmer with the closest answer is rewarded with a coin.

The more 'plots' a farmer has, the higher the chance of winning a coin.

Setting up the Farm

We got excited about Chia being the next big thing and decided to hitch a ride on the bandwagon. We had a spare old computer lying around so decided to fill it up with as much storage as we could find and farm some Chia!

To successfully set up a farm you need as much space for plots as you can get your hands on, the speed of this space is not critical so you can use spinning drives. We found 12 terabyte NAS drives to be the sweet spot for bang for buck, and opted for 4x Seagate Ironwolf NAS drives from Scorptec. (Note they’ve gone up $40 since we bought them!)

Seeding the plots however, is VERY disk intensive so you need speedy, AND reliable SSDs. Since they don't have moving parts you'd think that SSDs would be very reliable, but just like spinning drives, they wear out and eventually die. SSDs come with a TBW (Terabytes Written) rating which estimates the amount of writes you can do before the drive will die. Popular consumer SSDs like a 500gb Samsung EVOs 870 has a TBW rating of 300. Chia recommends getting server grade SSDs that have ratings into the Petabytes, but of course they come with a price to match.

We were limited by the age of our available motherboard so could only choose from SATA3 compatible drives, appropriate enterprise SSDs were also unavailable so in the end we settled on 500gb Seagate Firecuda’s 120 that are rated at 700 TBW (also from Scoptec). We decided on two so we could double the plotting rate.

Now we had our hands on the drives we just had to install everything, within a few hours of transferring components and wiring it up we were good to go and started plotting. 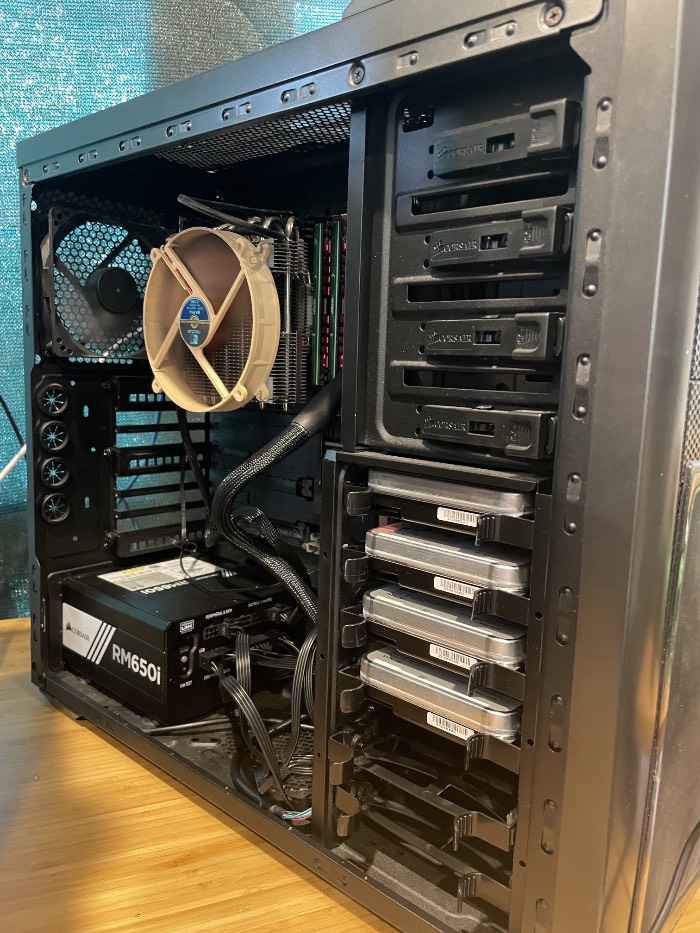 Our old hardware limits the speed of the SSDs and therefore the number of plots we generate. We're managing around 10 plots a day and will require close to 500 before we’ve filled the available storage.

When we bought our equipment (28th April) the chia calculator showed that we’d be earning around a coin a day when fully plotted, however with the official launch of Chia imminent, the network has exploded in growth, passing 1 Exabyte (1000 Terabytes) just one day ago, its now up to 1.68 Exabytes! So unfortunately our estimated time to a coin is down to one every 7 days. That’s still pretty good though, and if Chia does end up supplanting Bitcoin we might just make back setup costs. Either way it has been a fun exercise, even if we did spend too long on it, and if it does end up being a flash in the pan we can always use the drives for something else….